Mouseion The Girl with the Pearl Earring (ca.1665) 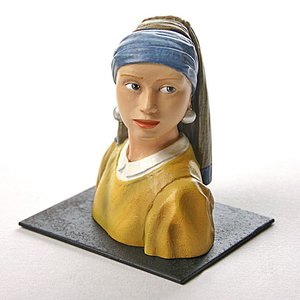 Although Vermeer is now considered one of the greatest painters
of the Dutch Golden Age, very little is known about his life. Initially,
Vermeer painted large history pieces as did many of his contemporaries.
However, he soon focused on the interiors which would later make him famous.
He was commissioned to create the latter by a select group of collectors.
The works were expensive because Vermeer could paint no more than three
of them per year. He was rapidly forgotten after his death, only to be
rediscovered in the 19th century.

Mouseion The Girl with the Pearl Earring (ca.1665)