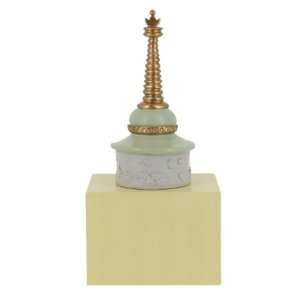 During the ascent of the Himalayas Tintin, Haddock and Sherpa Tharkey
found themselves in front of a Chorten. Despite the Sherpa's warning,
Haddock walks clockwise past the Chorten, which is bad luck and results
in a series of disasters which include costing the Captain his beloved whisky.
Chorten (in Tibetan) or Stupa (in Sanskrit) is a funeral monument in which
the ashes of the great Lamas are preserved.

Tintin in Tibet was first published in 1960 - Hergé